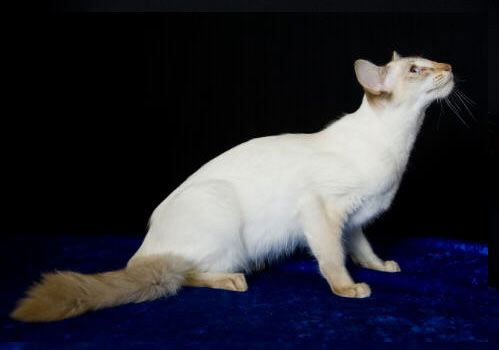 Being owned by a Balinese Cat is a lively and entertaining experience. They are undoubtedly “poetry in motion“, a source of delight and entertainment to all. The name “Balinese“ was derived from their close association with the Siamese and the fact that they reminded their original breeders of graceful exotic dancers from Bali.

Their personality swings to the extrovert rather than the introvert, and they remain kittenish, playful, talkative and boisterous throughout their life. Balinese are definitely not a cat for the faint hearted, and life with them is never boring! They flounce around with style and humour. Their coat needs the minimum care because it doesn’t tangle or mat.

Origins of the breed begin in the 1940’s when longhaired kittens appeared in Siamese to Siamese matings. As the longhair gene is recessive, many have argued that a mating to a longhair must be in their background, but much research into pedigrees and anecdotal evidence has not established that this was the case. A natural mutation is likely. In the 1950’s breeders found that the longhaired offspring mated to each other bred true – a requirement for establishing a new breed. This beautiful breed fascinated Sylvia Holland (Holland’s Farm) and a small group of breeders and CFA (Foreign Longhair register) recognised them by the late 1950’s and their present name was adopted. Championship status in America was gained in 1961. 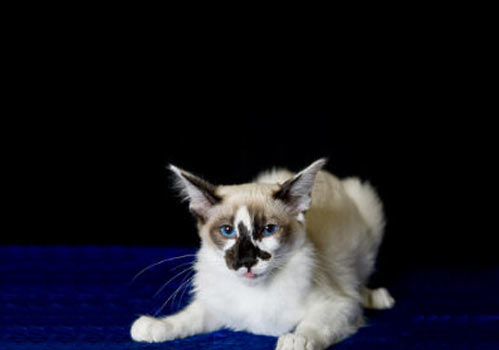 In 1973, Ch Verdes Blue Warrior of Davina (Bluepoint Male) and Davina’s Chocolate Gem (Chocolatepoint variant female) were exported to England and owned by Mrs Sandra Birch. Amongst Mrs Birch’s kittens was Sandoval Paris Review (Bluepoint male) who became a stud for Margaret Manolson (Cheldene), who expanded the genepool by intermating British Siamese and Balinese, and importing additional cats from America. Balinese were originally placed on the Longhair register, and judged in Longhair assessment classes, but when judges penalised them for looking too Siamese-like, representation was made to the GCCF to transfer them to the Siamese register, and evaluated by Siamese judges. This move was supported by all and contributed to the betterment of the breed. Championship status in the GCCF was achieved in 1986.

In 1981, Cheldene Scilla (Bluepoint female) and Palidew Pirate Prince (Sealpont male) were imported to New Zealand by Flavia Clifford-White (Souffl?). The following year, Pam Hogarth (Garthela) imported Yakshi Jungle Bunny (Sealpont male) and Quetinka Blue Niteflight (Bluepoint female). Balinese were first placed in the Longhair section, but were quickly moved into the Shorthair section where they could be judged alongside other Oriental type cats. Their challenge status was recognised immediately, and many received In-Show awards and Breeder’s Awards of Merit. An enthusiastic group of breeders expanded the genepool using Siamese and Orientals and prefixes like Chiionna (Lynne Robertson) and Zaffiro (Moira Valentine) became well known.

The challenge for breeders is to retain the Siamese type body formation (ideally in its extreme form) and combine it with a silky single longhair (no undercoat) coat that is silky and flows to follow the contours of the body. The long tail is luxuriously plumed, and there is no ruff round the neck.

Colours are seal, blue, chocolate, lilac, red, tabby, tortie and all other colours found in the Siamese, including the Lynxpoints (Tabbypoints). In America those not seal, chocolate, blue or lilac are called Javanese (in NZ the Javanese are the longhaired Orientals). Variants are those offspring carrying only one longhair gene, and therefore not exhibiting a long single coat. These are Siamese look-alikes (Variants) and may not be shown. They are, however, useful to breeders and are produced from outcrosses used to expand the genepool, and improve characteristics of the breed. 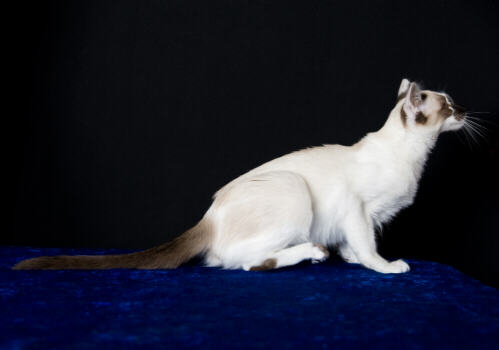 The Balinese was itself used in the foundation of a related breed, the Javanese.(Oriental Longhair). Javanese Variants (Oriental Shorthairs carrying one gene for Longhair) were produced by mating Balinese to the best available Oriental Shorthairs. These variants, when bred together produced cats of Oriental type and colour but with the same easy care semi-longhair coat of the Balinese, and thus the Javanese breed was established.

Balinese cats make delightful companions. Chatty, persistent, entertaining and sociable, you will never be lonely when owned by this most graceful breed. These cats will simply dance into your life with gay abandon, transforming your world with their light-hearted spirit.