The British Shorthair is believed to be descended from cats taken to Britain by the Romans in the first century AD. These cats mated with the native wild cats to produce domestic cats more amenable to human society and greatly prized for their mousing abilities.

By the beginning of the twentieth century, standards had been written for most basic colours seen today. 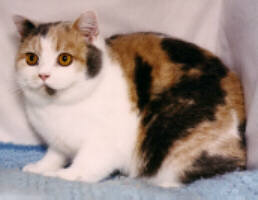 As with other pedigree breeds, World War 1 brought a serious decline in numbers of pure bred British available to breeders.

Cross breeding to unregistered domestics resulted in loss of type. Mating to Persians was disallowed, so it took some time to regain the desired rounded features distinctive to the breed. British Shorthairs were exported to the USA as early as 1900, with Silver Tabbies being the most popular colour. These cats may have contributed to the development of the American Shorthair.

The Standard for British Shorthairs places great emphasis on rounded outlines, calling for compact, cobby body, low on legs with broad, deep chest. The head must have a round face with full cheeks and good breadth of skull with round underlying bone structure, set on a short, thick neck. In profile, a rounded forehead leads to a short broad nose with nose break which is neither too pronounced nor too shallow. 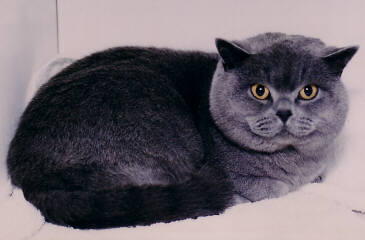 Ears should be small, rounded at the tips and set far apart, fitting into the rounded contour of the head. Eyes must be large, round, well opened and set wide apart, with no tendency to be oriental in shape. Legs are short and strong with paws round and firm. Tail is medium length, thicker at the base with a rounded tip. Coat must be short, dense and crisp.