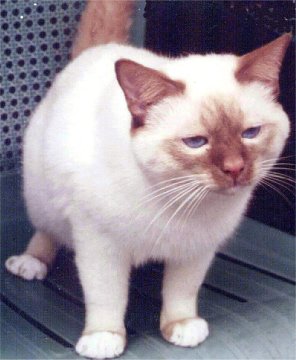 What attracts us to the Burmilla? Its beautiful coat, lustrous green eyes and delightful temperament. The Burmilla came into being by combining two already established breeds, the Chinchilla Persian and the Burmese, creating a new hybrid breed of exceptional appeal.

The Burmilla inherited the colour variations of both breeds, creating a palette of subtle hues and tones. Brown, blue, chocolate and lilac from the Burmese, combining perfectly with the black tipping and shading from the Chinchilla. With the addition of silver came the added the glamour of the aesthetically pleasing eye liner and darker lip markings in contrast with the brick red nose.

In producing Burmillas, it was not the intention to develop a Silver coloured Burmese, (Silver Asian), which was achieved independently in New Zealand without crossing to Chinchilla. In fact, the coat patterns of the Chinchilla and the Burmese are from opposite ends of the genetic colour spectrum, with the Chinchilla considered to be of Agouti genotype; with barring coat patterns and green eyes, while the Burmese is non-Agouti. The aim therefore was to create a new breed, which was specifically silver, green eyed, with a shaded or tipped coat and of modified Burmese conformation. 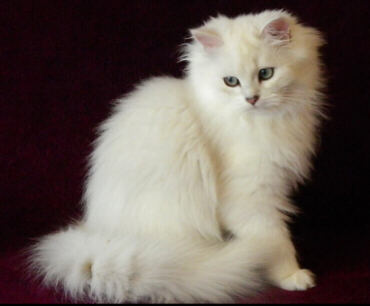 The first Burmillas appeared in England in 1981 as the result of an accidental breeding between a precocious young Chinchilla, Jemari Sanquist, and Bambino Lilac Faberge, a Burmese. This resulted in a litter of four black shaded female kittens, all of foreign conformation and with short dense coats.

These kittens looked spectacular and raised such a great deal of interest that similar breedings were planned. One of the original four kittens, Astahazy Gemma, went to Therese Clarke, with the object of breeding pure shaded and tipped silvers, hence becoming a foundation queen for the establishment of the new breed, the Burmilla.

The Burmilla is a cat of medium foreign type, showing striking contrast between the coloured shading or tipping and the silver undercoat, with delicate tracings of tabby markings on the head, legs and tail. There should also be a distinctive ?M? marking on the forehead. The coat is short and dense. The eyes are any shade of green, with dark pencilling on the lids. The nose is brick red with a dark outline. At birth, the kittens appear very dark, sometimes with distinct tabby markings which fade quickly.

The breeding program in New Zealand differs from the one conducted in the U.K. as CATZ Inc, like some of their counterparts in Australia, such as QFA and WSCA, have excluded the orange gene. Therefore cats that are Red, Cream and or Torties cannot be used in the program.

The Burmilla is a typically friendly and sociable cat, not a noisy or demanding as its Burmese progenitor but more adventurous and inquisitive than its Chinchilla forebears. Their temperament is as delightful as would be expected from such a combination of genes with the bonus of an exceptional health record, an example of often cited hybrid vigour.