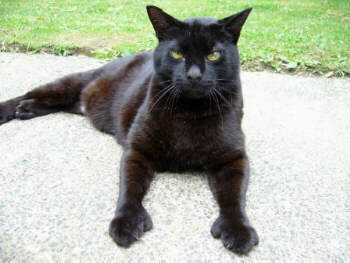 They are a newly recognized breed, being developed under strict guidelines.

Where do Polydactyls come from?

Polydactyl cats have a long and interesting history. For many centuries they have roamed South Western Britain and there is evidence of Polydactyl cats in countries as far a-field as Norway, although reports in Europe are few and far between, due mostly to the perceived link between cats and witchcraft.

Polydactyly is an allowable trait in The Pixiebob Breed, which is classified as a Natural Breed, and which competes in Championship in TICA, The International Cat Association. (USA)

It was also a dominant trait in many of the early Maine Coons, and was considered to be helpful to those cats in navigating the heavy snows of the State of Maine winters! Breeders however, selected for eliminating the trait from that specific breed.

There are various reports of a folklore in Southern England, which claims that when people found cats with extra toes, they offered them to Ships Captains, who apparently considered them to be ?lucky cats? and highly suitable for a sea-faring life. They were also considered to be gifted mousers, and because of their extra toes, better able to cope with life on moving decks.

Substantial populations of the cats with this mutation were noted in and around the Boston area, where they were commonly referred to as “Boston Thumb Cats”. An article in Cornell University’s “Cat Watch” in 1998 looked at studies done on Polydactyl cats from 1940 to 1970 and tentatively concluded that the trait probably occurred in cats which came from England to the Boston area with the Puritans in the mid 1600’s. These studies looked at the unusually high concentration of Polydactyls in that area, and in other east coast ports with strong shipping links to the British Isles, such as Halifax, and Yarmouth, and in Nova Scotia, where there were also higher concentrations of Polydactyl cats.

Author Ernest Hemingway is also recorded as having been given a polydactyl Maine Coon cat by a sea captain, and this cat it is believed, is the progenitor of the very many polydactyl cats now being cared for by the trust setup for them on the authors home island in the Florida Keys. This apparently led to Polydactyl cats sometimes being referred to as “Hemingway Cats”.

There are currently three independent private registries in the USA with whom the breeders of Polydactyls may register their stock. These cats are most often referred to as the “Native American Polydactyl”.

In truth however, it would be highly conceited to consider them to be solely a native of the United States when their history is more likely to be associated with the many ship cats which traveled with immigrants from England and Europe to the United States and other parts of the world between 1620 and 1900. Even the famous “Mayflower” was a merchant ship before her well known voyage to the USA and in those times she made several trips between England and Norway before being chartered by the Pilgrims.

In New Zealand and Australia, a huge number of immigrants arrived on Clipper Ships plying the seas between England and the Antipodes, between the 1850’s and 1900.

Many of these ships docked at Auckland and in the Hauraki Gulf, where today we find the greatest concentrations of Polydactyl cats.

In keeping with the CATZ Inc policy of inclusion and establishing rules for the responsible recording and registering of cats, these cats, which are a natural mutation, and an expression of an incomplete autosomal dominant gene, may now be registered with CATZ Inc under the breed name “Clippercats”.

Unlike the USA, Clippercats (Polydactyls from Domestic/Antipodean origins) may not be bred to other Clippercats, and there are strict guidelines set down by the Registry for their breeding to ensure that all Clippercats registered are the Heterozygous form of this mutation.

At this time, if you own a Polydactyl cat, you may be able to enter the cat on the open register as a Clippercat, if it fulfils very specific guidelines.

Breeding conventions include the registration of the number of toes on each foot and the Breed Standard includes both a limit on the number of toes allowed and restricts the structure of the feet to three accepted structural formats.

Clippercats may only be bred to New Zealand Shorthairs/Longhairs and the Breed Standard calls for New Zealand SH/LH type with the addition of the polydactyl mutation.

Clippercats may not be bred to any other currently recognized Championship breed.