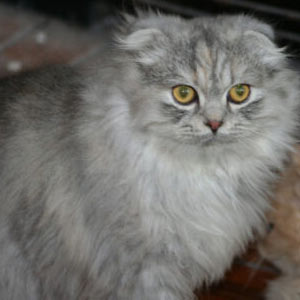 The first Scottish Fold on record was a White Shorthair barn cat named “Susie” that was born on the McCrae farm near Coupar Angus in the Tayside region of Scotland, northwest of Dundee. In 1961 a shepherd by the name of William Ross asked the owners of Susie if he could have one of her kittens and in 1963 William and his wife Mary received Denisla Snooks, who was also a White Shorthair “Lop-eared” cat like her mother Susie.

The first crosses to Susie and Snooks were listed as either “unknown” or British Shorthairs, but in an effort to preserve this unusual & distinctive cat with the folded ears many breeds were used to create a gene pool, including the Exotic Shorthair and the Persian. A number of the original Scottish Folds sported the Longhair coat, but this version of the breed was never standardized in the early years of the Scottish Fold’s existence.

The Highland Fold should mimic the Scottish Fold in every way except the coat length which has it’s own unique feeling and texture. Unlike the Main Coon’s shaggy, heavy coat that is shorter on the shoulders and longer on the stomach and britches or the Persian’s very long, thick double coat, the Highland Fold will have a medium-long to long hair length that is light weight with a silky feeling and does not have the thick cottony under coat. While many Registries in Europe and a few in the United States accept most all coat colors/patterns including chocolate, lavender, the Himalayan pattern, or these combinations with white, the CFA recognizes all coat colors except the color/patterns just listed. In CFA the only allowable outcrosses for the longhair Scottish Fold are the American SH, British SH and Perk-ear (or Straight-ear) Scottish Fold.

Just like the shorthair Scottish Fold, the Highland Fold has the same sweet open expression with large round eyes, round head and moderate profile. The body is medium in size and proportion without being either long like the Oriental breeds or cobby like the Persian. The tail is to be in proportion with the body without being short and inflexible. Of course, the most distinguishing feature on the Highland Fold are the tiny capped ears that fold down and forward which will still display ear tuffs similar to that of any longhair breed of cat.

Even though the Scottish Fold breed as a whole tend to be very laid back and easy going with an almost clown like, playful personality that lasts well into adulthood, the Highland Fold tends to be even more relaxed in disposition when being handled whether they are being played with and loved on by their human companions or judged at a cat show. While the Highland Fold is not very demanding or vocal, they do love to be near their owners and make wonderful lap cats. It is not unusual to see the Highland Fold stand up in their ever familiar “Prairie Dog” stance when they hear an unusual noise or to sit back and relax in what is now called the “Buddha” position.

The Highland Fold is not only a beautiful breed to admire, but is a very loving cat that makes a wonderful companion. Because of their easy going nature, the Highland Fold does well in a home with children and other pets and have even been known for having the family dog as their best friend.

The Highland Fold is recognized for Championship in CATZ Inc, alongside its shorthair counterpart the Scottish Fold.