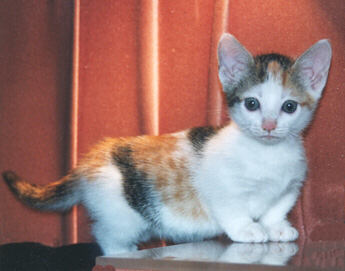 Munchkins are naturally occurring dwarf cats, which means they have unusually short legs. The breed as we know it today began in Rayville, Louisiana.

In 1983 music teacher Sandra Hochenedel discovered two cats hiding under a pickup truck where they had been cornered by a bulldog. Hochenedel rescued the cats and took them home, later noticing two things-both were pregnant, and both had short, stubby legs. She called them Munchkins after the little people in The Wizard of Oz.

She kept Blackberry, the black cat, and gave away Blueberry, the gray. When Blackberry produced her first litter, Hochenedel gave one short-legged kitten, named Toulouse, to her friend Kay LaFrance, who lived in Monroe, Louisiana.

Since LaFrance’s cats were allowed free access to the outdoors and were not altered, a feral population of Munchkins occurred around Monroe, where they apparently competed very well with their long-legged friends for prey and mating opportunities.

Hochenedel and LaFrance contacted Dr. Solveig Pflueger, chairperson of TICA’s genetics committee in USA. Her studies determined that the short legs were the result of a dominant genetic mutation affecting the long bones of the legs. This mutation apparently occurred spontaneously within the feline gene pool. Any cat that possesses this gene will exhibit the short legs. A cat that has received the Munchkin gene from one parent will produce Munchkin kittens at an approximate ratio of one Munchkin to one normal kitten. 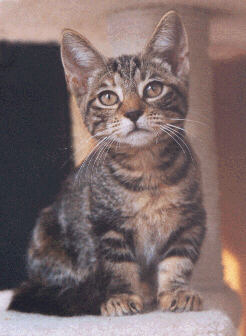 Cats with short legs are not new to the scientific world: An English Veterinary Record of 1944, contains an entry by Dr H.E.Williams-Jones who describes four generations of cats with short limbs, including an 8 1/2 year old black female, documented as having had an extremely healthy life. Her dam, great dam, and some of her progeny were similar in appearance. The cat?s movements were described as ferret-like, but other than the short legs the cats were reported to be normal in every way. Unfortunately, these cats seem to have disappeared during World War II, not surprising in that many feline bloodlines, even established ones, disappeared completely during this period of deprivation.

In 1956, Max Von Egon Thiel of Hamburg, Germany, described a cat that he had first seen in Stalingrad in 1953. The cat had unusually short legs but was in no way functionally hindered and was seen playing among its normal siblings and other young cats. At times it was noted to sit on its haunches with it?s front legs in the air, similar to the alert stance of a rabbit. Because of this behaviour, the cat was dubbed the “Stalingrad kangaroo cat” by the author.

The day before he was to return to Germany, the cat was taken away by a Russian physician and there is no further information about the cat available. However, based on the description, this undoubtedly represents the same trait seen previously in Great Britain.

In a paper published by Dr Pflueger, (Jan ’99), she states: “One concern I had when I first began working with Munchkins in 1990, was that there might be a risk for malformed homozygous kittens. This was not an unreasonable fear based on the lethality of homozygous achondroplasia in humans. However, I have bred Munchkin to Munchkin, including very close inbreeding, without producing anything vaguely resembling the phenotype of homozygous achrondroplasia. There is sufficient data at this point to suggest that abnormal homozygotes similar to human achondroplasia are unlikely to appear with future breedings.” She further states, “I believe that Munchkins are happy healthy cats and that they have a future as a Championship breed. I am not aware of any reason that would lead me to believe otherwise.”

In 1995, Munchkins were first recognized as a new breed in the States under The International Cat Association and are now recognised in many countries around the world. According to Laurie Bobskill, breeder and president of the International Munchkin Society, 19 separate Munchkin-like mutations have been found in the United States, all unrelated to Blackberry’s lines. Breeders find this encouraging, because it gives credence to the contention that this mutation is a viable variation of Felis catus. Ironically, the controversy surrounding the breed, likened to the sports car of the cat fancy, has contributed to its growing popularity. Because of articles in The Wall Street Journal, People Magazine, and other publications, public demand for Munchkins has been great, the waiting lists long, and the supply limited. 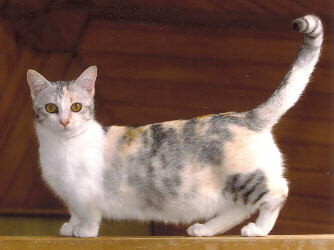 Munchkins have been bred in New Zealand since 1997 and were accepted for registration by CATZ Inc in 2001, having been turned down for recognition by the NZCF on two previous occasions. In their first show season under CATZ Inc. they were shown in the New Breed and Colour class and were then accepted into Championship in 2003. They have proved to be extremely popular with the Judges from Australia and the USA as well as NZ. The public are smitten too and love watching these plucky little cats strutting up and down the cat walk and sitting like meerkats on their haunches!

One example, a female named “Shortland Little Bow Peep” not only gained the title of Grand Champion but in 2003, became the 5th Best National Championship Cat in New Zealand.

Munchkins love to wrestle and play with their long-legged feline friends, happily unaware that there’s anything different about them. Nor do their feline companions treat them like members of the vertically challenged. Munchkins also adore dogs both big and small. One owner reported that her Munchkin likes to hide and then leap out on her dog’s back and manages to hang on while the dog races round the room! 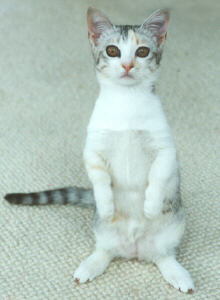 Fanciers assert Munchkins can do anything an ordinary cat can do, except leap to the top of the bookcase. (Well, that is until recently when it was reported that one Munchkin spied an Ostrich feather on the top shelf of a six foot bookcase and shimmed up there without any trouble whatsoever, although her descent with feather firmly clenched in her jaws, was not quite so graceful!) Many Munchkins can jump onto the kitchen counter, while others take a more scenic route.

There is something indefinable about a Munchkin that you really have to see them for yourself to understand their appeal. Maybe it’s a maternal thing; a kitten that never grows up. They appear to be small and vulnerable and tend to melt one?s heart. Truth is that they are strong and robust, evidenced by their agility, speed over the ground and, for their height, extremely powerful jumpers!

For their part, Munchkins, oblivious to the controversy surrounding them, go on being just what they are “cats”self-assured and outgoing. Munchkins are also known as “magpies,” often borrowing small, shiny objects and stash them away for later play. These little “rug-huggers” have more than their fair share of curiosity and there is no part of the home that does not get thoroughly explored and investigated.

As well as having sweet natures, Munchkins are affectionate, outgoing and intelligent. They love company, especially that of children with whom they seem to be especially popular. They are exceptionally playful and get along well with other cats, dogs and pets. And yes, they are amusing to watch which is a real bonus in anyone?s life. Proficient hunters, Munchkins love a good game of catnip mouse or feather teaser, but when playtime is over, they want a warm lap to snuggle into and strokes from a loving hand, like any other domestic cat.