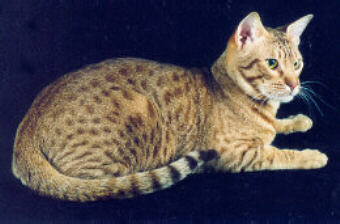 If you are looking for love and companionship, this breed should be considered. Their sociability, confidence and easy going natures will delight everyone, from families with young children to those on their own looking for a ‘one-on-one’ relationship. Their loyalty is ‘dog like’.

This is one of the smartest cats you will meet. Their adaptability makes them ideal travelling companions wherever you are heading – they like to be with you – a real ‘people cat’. Their personalities are complemented by a beautifully athletic body with the grace of a cheetah; their spots reminiscent of the endangered species of the wild.

So where did this amazing cat come from? Many good things happen in life by chance and the creation of the Ocicat was no exception. Back in 1964, Virginia Daly, a cat breeder from Michigan, USA, decided to produce an Abyssinian-pointed Siamese. Daly bred an Aby to a sealpoint Siamese which produced a litter of ticked hybrids. She bred one of these back to a chocolatepoint Siamese to produce tickedpoint Siamese. In that same litter she found something unexpected – a unique kitten with golden spots on a creamy background! Daly’s daughter named it “Tonga” and called it an “Ocicat” because of its resemblance to an Ocelot. Tonga was neutered and sold as a pet, but not forgotten.

When Clyde Keeler, a noted geneticist, published an article discussing the desire of cat lovers to see the development of a domestic cat breed that imitated some of the wild but vanishing species, Daly decided to repeat her original breeding and produced more spotted kittens – the Ocicat was on its way.

First registrations in CFA inadvertently listed the Ocicat’s parentage as Abyssinian and American Shorthair. Cross-matings were allowed for a limited period, which proved to be an advantage to the Ocicat, as it expanded the relatively small gene pool, and added size, muscle and beautiful shades of silver to the breed. It also reinforced the lovely classic pattern.

One could say the Ocicat gets its remarkable temperament from the best of all three breeds in its background. From the Abyssinian – above average intelligence and an athletic and graceful body which is a pleasure to watch climbing trees or even prowling around your living room. The Siamese donated its affectionate nature that bonds closely with its owners. The American Shorthair is a laid back, easy going breed with a well-developed, muscular developed, muscular body with weight and substance. All these qualities came together in the Ocicat. It has the exotic beauty of our wild cats while maintaining the lovely, predictable disposition of the domestic cat.

The ideal Ocicat is a medium to large, well-spotted agouti cat with no extremes of type. It should look athletic while still being well muscled and solid, graceful and lithe, yet with fullness of body and chest. It is alert to its surroundings and shows great vitality. The head is a modified wedge with almond shaped eyes, a pronounced whisker pad with a suggestion of squareness and moderately large, alert ears.

Spots are important on the Ocicat and should be large thumbprint shaped and well scattered. On the sides of the body there should be a subtle suggestion of a classic pattern, with a spot circled by spots in place of the bull’s eye. Bred in twelve colours, with tawny, chocolate and silver being perhaps the most popular.

The first Ocicat in New Zealand was “Jansied Tarzan”, imported from UK in 1990 by Twink McCabe. To establish the breed here, a programme was undertaken to produce spotted kittens by breeding Abyssinian and Siamese. The first cinnamons came from a sorrel Abyssinian, “Jafba The Red Baron”.

Two more imports from UK introduced the first silvers. Pat Hogan joined forces with Sharon and Bernard Carroll, under the Spotifur prefix to import “Thickthorn Tarragon”, a silver male, and “Thickthorn Holly”, a chocolate silver female. In 1993 McCabe imported the first chocolate from the US, a classic pattern female “Saga Classic Cola” and, with Glynne Jackson, a chocolate male “GC RW Auxarcs Fire Dancer”. Further imports were a silver male “Catoninetails Indiana Jones” by Val Lewis and a Tawny male from Hawaii “GC BC Katz Halawa” by Julie Boyd. Then, in 1997, Glynne Jackson imported a Chocolate male, GC RW Alspots Storm Cloud of Echoesofmaya who could arguably rate as the best Ocicat yet to reach our shores.