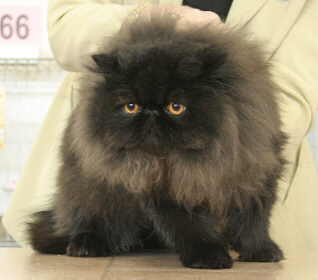 There can be little doubt that a top flight Persian cat, in excellent physical condition and lovingly groomed to perfection, is an absolute picture of full feline splendour. Such magnificence does not come easily and we can but only admire the breeders and owners of such stunners for the care and attention to detail given to a top show Persian. There is enormous work in preparing a fully coated Persian to be shown in spotless condition.

Persians for the most part, are delightfully laid back creatures with extremely loving, trusting, gentle dispositions. They readily give their love and will seek out human companionship.

The Persian Cat of the 21st century is very different in phenotype from its earliest recorded predecessors, dating from the late nineteenth century. The origins of the breed will forever be shrouded in mystery but there is archaeological evidence to suggest that longhaired cats have been popular in the Persian Gulf region as early as 1700 B.C. In Europe, the Angora, (so-named after the city of Ankara), may have been bred to local domestic longhairs. This is very likely to have been the scenario in both Britain and France where Longhaired cats have long been admired for their beauty.

Right from the outset of organized cat fancying with Harrison Weir, the “Persian” cat has been held in high esteem by cat fanciers. In his book “Our Cats” published in 1889, Harrison Weir, who is generally acknowledged as the Father of the Cat Fancy, declares about the Longhaired varieties: “There are several varieties ” the Russian, the Angora, the Persian, and Indian. Forty or fifty years ago they used to be called French cats, as they were mostly imported from Paris” more particularly the whites, which were then in fashion.

He further tells us about the differences in coat texture and how some colours were original while others were derived by crossing Persian cats with Domestic Shorthair varieties. In the years following the first Crystal Palace Shows the popularity of the emerging Persian breed was no doubt greatly enhanced by Royal patronage, given to the “Blue Persian” by Queen Victoria.

Since those times, the phenotype has evolved dramatically, especially in the style of head. A look at some photos of early Persians dating even from as late as the 1950?s and comparing the head type to today’s cats, shows the very marked trend toward a bracheocephalic head style in order to accommodate the short, broad snub nose on a large round massive skull.

This change in head style was made possible over a relatively short period by very selective breeding, and both line and in-breeding on cats considered to have and to produce what breeders interpreted as the most highly desired traits. Harrison Weir considered even in the 1880’s that the colours vary very much, and comprise almost every tint obtainable in cats but even he would not have envisaged the development of the Shaded Cameos (by introducing the ?o? gene for Red, into the Chinchilla gene-pool), or the development of Bi-colours by pioneer Nora Woodifield half a century later. Nor would he have foreseen the production of the pointed (Himalayan) varieties made possible by out-crossing to the Siamese, pioneered in Britain by Brian Sterling?Webb in conjunction with the Mingchiu cattery. And even more obtuse, he could not have envisaged the change in head style and temperament underscoring the desire in the last century to develop the Exotic Shorthair, thereby emulating the new type style in Persians, in a quality shorthaired cat.

It has been said many times that the Persian head type has evolved as far as it can, taking into consideration the cats quality of life and the overall health of the breed. This is probably true, so that the greatest emphasis and challenge for breeders today is to “perfect” those desired attributes, developing a look according to their personal interpretation of the written “standard” for the Persian breed. This challenges them to breed for well boned, cobby-bodied, wide eyed beauties; with an enquiring sweet expression, small rounded ears and a long spectacularly healthy flowing coat. Breeders today are also more aware of the “long-term” commitment to a cats health, hence the trend to test for PKD (Polycystic Kidney Disease), to blood-type for incompatible mates and by carefully selecting to diminish the frequency and likelihood of twisted jaws, pointed skulls, cardiomyopathy, lordosis and a host of other problems associated with Persians and other breed varieties.

The establishment of the breed in New Zealand got a major boost when dedicated and enthusiastic breeders such as Mrs Bernice Downey (Lindisfarne) were among the group of pioneers supporting an almost constant stream of imports. Many early Persians came to our shores from the United Kingdom, the first taking the long journey by ship, often as cabin-mates to members of the crew until they reached their destination and appointed owners.

Sadly not all survived the arduous journey. But most did, and they became the genetic backbone on which the breed was established in this country. Imports and exchanges with Australian breeders continue to this day with a good infusion of American bred cats since the early eighties. 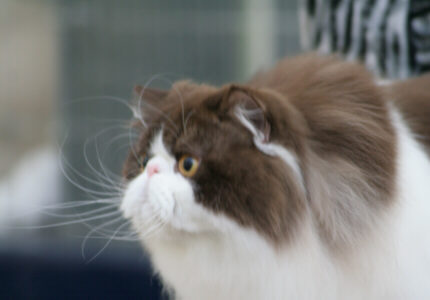 To the would-be pet owner, one cannot underscore enough the commitment required to take on a Persian as a pet. Vaccines must be kept current, grooming must be done on a regular basis. But the Persian is a generally strong cat, capable of coping well with minor health problems. The biggest demand on the owner will be to attend to the extra grooming which on the surface may appear to be an onerous task but which in fact is an opportunity to bond with and give back to their pet, the open affection so freely given by this sweet-natured and gentle breed.

Despite these demands, the popularity of the Persian has seldom wavered. In the USA in particular it has long ranked as the most popular and numerous registered breed. From the 1870?s through to beyond 2000, the appearance of a fully groomed White Persian has caused onlookers to verbalise their amazement. But ?beauty? is not always defined by what you see or what is tangible, but also in temperament and suitability as a companion. So if it is a loyal quiet friend that you long for, one who will love you despite yourself, then you need to look no further than to the glorious Persian. With those large, lustrous and enquiring eyes alone, they will win your heart.