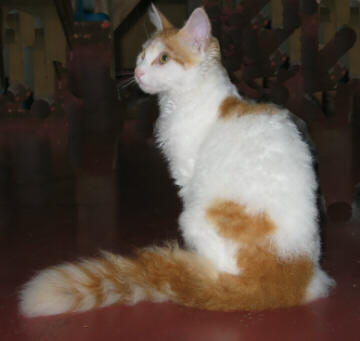 The LaPerm is a unique combination of curly hair and an affectionate personality, both of which set the breed apart from others. One cannot deny the love and affection a LaPerm will shower upon its owner nor the curly or wavy hair that also makes the breed so interesting.

The kitten that exhibited traits of the original mutation that has formed the basis for the LaPerm breed sprang from strong, healthy, domestic “barn-cat” stock. Late one night in 1982, on the Oregon farm of Richard and Linda Koehl located near the ancient hunting and fishing grounds of the Wishram Indians, the noise of several dogs barking awakened Linda. She quickly dressed and went outside to find the dogs had one of her barn cats cornered and the cat was protecting her newborn litter of six kittens. 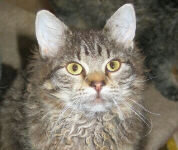 One of the kittens was born completely bald, looking nothing like her mother or her littermates. While the kitten had no hair, it did have large wide-spaced ears and a blueprint pattern on her skin that mimicked a classic tabby pattern. Within eight weeks the kitten began to grow very soft, curly hair. At three to four months of age the kitten, now named “Curly”, had a full coat of curly hair. Not being very knowledgeable about cats, owner Linda Koehl accepted the “mutant” as unique and thought nothing more of the matter.

Curly was bred and gave birth to five kittens, all male and all bald at birth like their mother had been. This was intriguing to Linda and after much research it was decided that this was some sort of “Rex” mutation causing the curly coats. This was thought of as a “novel” situation but beyond that, it was never given another thought. Curly’s future litters provided only occasional hairless kittens of both sexes. As Curly was an outdoor cat, she eventually disappeared but she left behind a number of kittens that had all inherited her soft, curly coat and marvelous disposition. 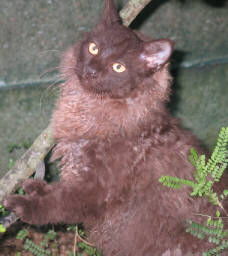 During the next 10 years no attempt was made to breed selectively but as the frequency of bald kittens increased in the random bred litters, Linda began to seek additional information about her unusual cats. She had no knowledge of genetics or breeding and thus allowed the cats to roam freely throughout the barns and orchard for several years. As she became aware of how truly unique these cats were, she started to confine the cats and control the breedings. It appeared that the curly gene was dominant and carried by both males and females. The breeder was totally unprepared for the interest and excitement generated by cats she decided to enter in a cat show.

Linda gave the cats the breed name “LaPerm”, which means wavy or rippled. The LaPerm can sport anything from a wavy coat to ringlet-type curls that range from tight ringlets to long corkscrew curls. The tightest curls occur on the underside of the cat, on the throat area and at the base of the ears. The longhair is generally blessed with a curly plumed tail and often exhibits a full, curly ruff. The coat is moderately soft in texture, yet each cat’s coat is distinctly unique. The shorthair has more texture to the coat than does the longhaired variety. It does not have the ruff, has a “bottle-brush” type tail and the coat generally stands away from the body, parting down the middle. The LaPerm comes in every recognized color and coat pattern. Occasional kittens are still born hairless, but most have short wavy hair or straight hair at birth. Kittens often go almost totally bald beginning with a spot on the tops of their heads. This process generally starts when the kittens are about two weeks old and they can be in varying stages of baldness during their first four months or so. The coat will generally come back in and will always be curly if the kitten was born curly.

Coat variations throughout the life of a LaPerm range from moulting that can leave a sparse, thin coat for life to a possible full coat after neutering or spaying. Males seem to be more prone to the moulting process and the females will often lose their hair if cycling too much or after nursing a litter.

There is no scientific explanation as to why so many unusual things happen with the coats of the breed although it is thought that it is caused by hormones. The one certain thing is that having a LaPerm around is never boring as you try to out-guess what phase the coat will go through next.

It should be remembered that one-quarter of the time you will be privileged to have one of the ugliest cats on earth, and three-quarters of the time you will have a unique curly coated companion that is like no other in the world. The coat on both the longhair and shorthair can vary in length and fullness depending upon the season and the maturity of the cat. Both males and females of the longhair variety may have a full ruff on the neck at maturity but males are generally curlier than females. Both will have a saddle of shorter hair over their shoulders although this is much more apparent on the longhair. 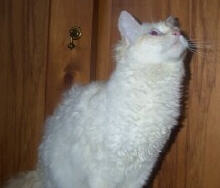 The face and head of the LaPerm is somewhat triangular in shape with fairly wide set ears that continue the shape of the wedge, relatively full whisker pads and large expressive eyes. The LaPerm also boasts a splendid set of curly whiskers and eyebrows. Males tend to weigh 8-12 pounds while the females grow to be 5-8 pounds. LaPerms are gentle and affectionate but also very active. Unlike many active breeds, the LaPerm is also quite content to be a lap cat. The LaPerm will often follow your lead, that is if they are busy playing and decide you want to sit and relax, you can simply pick up your cat and sit down with it and it will stay on your lap devouring the attention you give it. LaPerms seek human contact and will purr as soon as they become aware of your presence. They are inquisitive by nature and always want to know what is going on around them. They will reach for your face with their paws and rub their faces against your head, neck and face. They beg to be held, draped over a shoulder or cradled in your arms.

This is a breed that needs to be around people more than perhaps any other. The LaPerm is generally accepting of any new situation such as traveling or being handled by strangers. Generally speaking , this is a breed that knows no strangers and readily adapts to being handled by anyone. The LaPerm generally has a quiet voice but may be vocal when wanting attention. They adapt well to apartment living, and have strong bonding instincts that make them gentle, loving companions.

The breed is low maintenance requiring a minimum of grooming because the coat does not easily mat. The curls of the LaPerm hold the hair, much like that of a Poodle, therefore shedding is minimal. Bathing and towel drying is all that is required to maintain the curl. The coat is also somewhat hypo-allergenic which makes the breed a bonus for most people who suffer from allergies to cats or asthma. For allergy sufferers, regular bathing of the cat is recommended, although it should be noted that more hair than normal will be shed for several days after a bath. Daily combing during this time frame will help get the coat back to normal while keeping the excess hair at a minimum.

LaPerms are truly different from any other breed of cat because of their unique combination of appearance and people oriented personalities. The breed has captivated nearly everyone who has the opportunity of seeing one. Once a LaPerm graces your household you will be hard pressed to think of owning any other breed and may find it a necessity to have more than one. Cradling a LaPerm in your arms can touch your senses.

Running your fingers through the sensuous coat becomes automatic and you won’t want to stop. Listening to the purr and seeing the intelligence unfold as you teach your cat tricks such as fetching will give you an unmatched feeling of love and respect for the breed. Over the years the LaPerm breed has gained recognition in four registries in the United States. The breed has also been established in other countries such as Germany, South Africa, The Netherlands, Japan, England and New Zealand. The first LaPerm champion in the world was European Champion Uluru BC Wiyaka. It is only a matter of time before this unique breed will be recognized world wide.