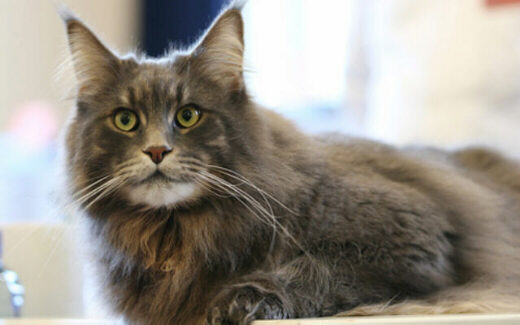 The Maine Coon has changed very little in appearance since its beginnings as a naturally occurring long-haired domestic cat in North America. With shaggy coats and bushy racoon-like tails, these large cats were known as Maine Coons in their native state for many years before being accepted as a pedigree breed.

The Maine Coon Breeders and Fanciers Association was formed in 1968 in order to preserve and promote the breed. All registries had recognized the Maine Coon by 1980 and today it is increasing in popularity, being bred and shown world-wide.

While Brown Tabby was originally the most common colour, the Maine Coon is now bred in every colour except chocolate, lilac, ticked-tabby or pointed.

This is a muscular, broad-chested cat with long, sturdy, ‘rectangular’ body, substantial, wide-set legs in proportion to the body, large feet with well-tufted toes and a tail that is long, wide at the base, tapering and well covered with long, flowing fur. The coat should be shaggy, silky in texture, preferably with a ruff, shorter on shoulders and heavier on stomach and britches. Head length should be a little longer than width, with high cheekbones, square muzzle and strong chin. Ears are large and well-tufted.

The silky coat is simple to groom, requiring only an occasional comb-through, though some cats have undercoats that will matt, especially on the stomach. Generally considered an independent breed rather than a ‘lap-warmer’, the Maine Coon nevertheless enjoys human company and will take a lively interest in your activities. A gentle nature makes this breed reliable with children and easily accustomed to other cats and to dogs.

Inherited health problems in the Maine Coon can include hip dysplasia and cardiomyopathy (a degenerative heart disorder that may cause a mild murmur or serious heart problems). Responsible breeders are working to eradicate these diseases from the breed.

Maine Coons mature slowly, reaching full size at around three to five years old. Females are smaller than males, weighing between 4 and 5 kilograms, while males often weigh from 6 to 8 kilograms. They retain their kitten personalities into adulthood, particularly the males, who will often indulge in clownish behaviour.

The first Maine Coon in New Zealand was imported from Australia in 1996 by Grand Manner cattery in Wellington. In 2000, Annette Norris of Maineflame cattery imported from Sweden S*Ylletrollets Hobbe, a Brown Classic Tabby & White male, (who became Catz National Best Of Breed award winner in 2002) and S*Mooncoon’s Freckles, a striking Tortie female.