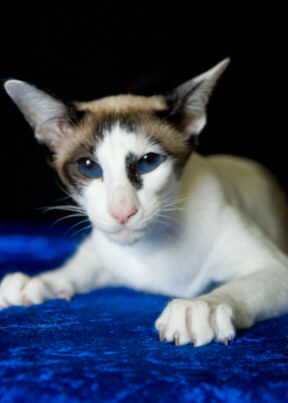 There are several theories concerning the possible origin of this ancient breed. It has been often stated that the Siamese Cat was of such elevated status that it was confined solely to the Royal Palace of the King of Siam. A more modified view would suggest that this type of cat was also present in many other princely homes, in the mansions of the Siamese aristocracy, and in the precincts of the sacred temples.

The role of this breed was not merely to rid the palaces and mansions of rodents, but to provide a repository for the souls of the human occupants when their earthly lives ended. In this sacred role the animal was said to have played a vital part in the religious lives of the people, and for this reason it was highly unusual for a foreign visitor to be allowed to take away any Siamese Cat, excepting it being offered as a unique and very special gift.

There are early records of occasional ones being exhibited at European zoos, and a few must have been obtained as pets because of their presence at the very first of the British Cat Shows, dating from 1871. The earliest confirmation of the exhibition of a Siamese cat with typical coat pattern, dates from 1879, when an article in the London Daily Telegraph referred to ?a couple of juveniles of Siamese extraction, with black muzzles, ears, feet and tail setting off a close yellowish drab coat?, the exhibitor being a Mrs. Cunliffe-Lee. 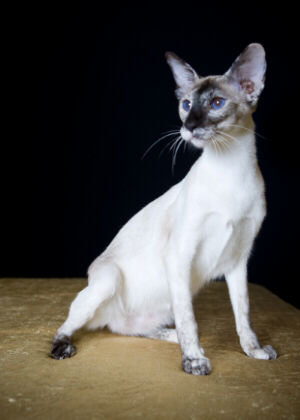 The earliest documented case of Siamese Cats being exported to Britain dates from 1884, when Mr Edward Blencowe Gould, was an acting vice-consul in Bangkok. A partial confirmation is to be found in a letter written by Gould’s sister, Mrs Lilian Velvey, for whom the cats were a gift. These are the oldest “official” Siamese. They produced a litter, and the kittens were exhibited by Mrs Velvey at the 1885 Cat Show at the Crystal Palace. They enjoyed great success there, winning both the “best shorthaired cat” prize and the “best cat in the show” out of 480 entries. At the very end of the 19th century a few of the famous European cats found their way across the Atlantic, and were soon appearing in cat shows there. By 1909 the Siamese Cat Society of America had been formed, and the breed was firmly established as an important new type of show cat. From that point onwards, on both sides of the Atlantic, the Siamese went from strength to strength, and throughout the 20th century its popularity has continued to spread worldwide.

The Siamese cat should be a beautifully balanced animal, with head, ears and neck carried on a long svelte body supported on fine legs and feet with a tail in proportion. The sleek lines and oriental deep blue eyes, set in a finely chiselled aristocratic head, could indeed be considered as a living work of art. It commands attention by it?s appearance, an extraordinarily expressive creature and often persistent vocal range, inquisitive personality and loving nature. Definitely not one to be ignored!

The coat pattern of the Siamese is uniquely recognisable, and is known genetically as the “Himalayan” pattern. This fully pointed expression of the pattern was first recognised ONLY IN THIS BREED and as such, the many new breeds of today sporting such a pattern can trace the introduction of the ?Himalayan? coat pattern in their colour range directly to Siamese cats. 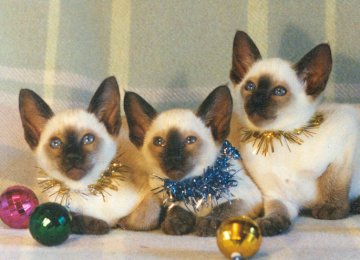 There has been much debate over the early colours, but the only recognised colour of Siamese in the West in these early days was the “Sealpoint,” with seal brown (almost black) extremities creating a striking contrast with the paler fawn or buff-coloured body colour. The “sealpoint” was therefore the only colour to be recognised up until the 1930’s. Today there are many different colours.

In some registries the range of colours is limited to only Seal, Blue, Chocolate & Lilac, while in others the colour of the points may come in almost any conceivable colour that is genetically possible.

So the role of the Siamese cat has been immense and continues to play an integral part in the further development of breeds and in helping to create that air of mysticism that goes hand in hand with the cat.

CATZ Inc. recognises Siamese Cats in Championship in a huge variety of point colours and has established genetic markers for the preservation of genetically identifiable pedigrees.