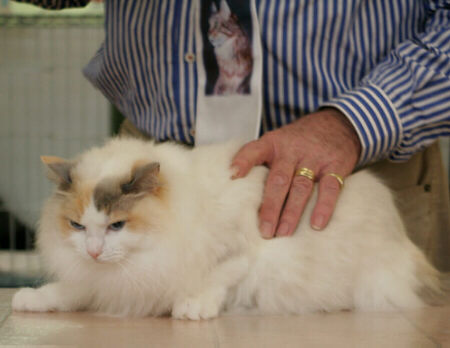 The origin of the Ragdoll is believed to date from around the early 1960’s with a loving white longhaired cat of gentle disposition and mixed ancestry named Josephine. This notable cat carried the genes for producing pointed markings.

Josephine was a free roaming Angora-like cat that bred at will and was very lucky to have survived a bad accident. Despite the accident, Josephine continued to give birth to happy healthy kittens, which greatly impressed the people they came into contact with. They soon discovered that the kittens grew to be very sturdy, and had a “remarkably relaxed disposition”, a true loving nature, beautiful blue eyes and long, non-matting fur.

A beautiful Birman lookalike male cat was one of the sires of Josephine’s kittens. A handsome black Burmese lookalike male was another, plus she had several additional kittens by other, undetermined non-pedigree sires.

Josephine’s owner, California breeder Ann Baker, realised that Josephine’s kittens were somewhat special and selected those from which she could produce the look she wished to preserve for the breeding programme that was developing in her mind. The kittens with the desired traits were therefore retained and carefully line bred to keep the strain pure and to fix the type standard for the emerging “Ragdoll” breed. This somewhat eccentric and entrepreneurial breeder even took out a patent on the new breed so that other breeders wishing to breed from her lines, had to do so under licence by paying a royalty fee for every kitten produced and sold. 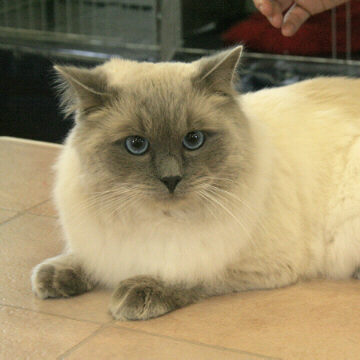 The name “Ragdoll” came about because of what appeared to be the cat’s unique ability to relax like a child’s toy rag doll. Today, ALL Ragdolls must be descendents of Josephine and her progeny and over the years no other strain of Persian, Burmese or Birman was allowed to be reintroduced into the lines. However that did not always remain the case, with a few breeders introducing an outcross to bring new colour varieties to the breed. Although there is variation in pattern, the breed is renown for its uniformity of disposition.

Ragdoll kittens are born white and their true colour is not fully developed until they are about 2 years of age, usually maturing at approximately 3 years of age. Neutered males weigh approximately 5 to 9 kilograms, females on average about 2 kilograms less. Their fur is rabbit like, medium to long and very easy to care for.

Ragdoll cats are large well-balanced cats with no extreme features. The head forms a broad equilateral triangle, modified by a gentle rounded muzzle. Their bodies form a long rectangle, are broad and solid with “medium to heavy” bone structure. They have long legs and a long well plumed tail.

Ragdoll cats have wonderful personalities: they are loving, placid and easy going and as such they make wonderful house or apartment cats. They are intelligent and can easily be trained. They have a unique temperament, usually sweet and docile and are not fighters by nature. They show many characteristics usually attributed to dogs, including devotion to their owners. They like to sleep on one’s feet, or following their owner about the house as well as flopping on their owner at every opportunity.

Ragdolls invariably display the unique characteristic of going limp in your arms when picked up and they seem to enjoy being held like a baby. They are usually floor cats, preferring to purr or call with soft musical voices rather than yowl. For all these reasons they make ideal pets for children, or companion cats for the elderly. They also mix well with dogs and other pets.

Mitted – Point coloured mask, ears, tail and legs, with white mittens on the front feet and short white boots on the back feet. White on chin, ruff and stomach.

The first Ragdolls in Australasia came into Tasmania to Dot Graham’s “Ragada” Cattery in the late eighties. Cats from this source as well as a string of new imports from the United Kingdom in 1990-1991 formed the foundation stock of Gerda Stapel’s “Kaiwara” and “Ragstar” Ragdoll Catteries. From Gerda, came several of the early imports into New Zealand. The Ragdoll has, even from these early times, enjoyed burgeoning public popularity in New Zealand, with the number of breeders actively promoting the breed, jumping significantly between 1995 and today. In 1996 Gerda imported the first Lynxpoint (tabbypoint) Ragdoll into Australia and in recent years she has worked to introduce both Chocolate and Lilac into the colour spectrum of the Ragdoll.

The Ragdoll patterns come in six basic colours, seal, blue, chocolate, lilac, red and cream. The points may be solid, tortie and/or lynx.

CATZ Inc accepts for Championship all of the above patterns and colours.