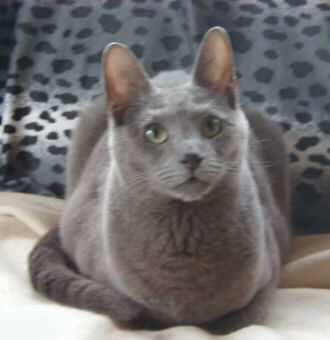 The Russian has had many different names including Blue Russian, Foreign Blue, Maltese, Archangel Blue and Russian Shorthair.

An early breed of shorthaired cat believed to originate in the cold northern regions of Russia, the Russian adapted to this harsh climate by developing, not a long furry coat, but a short, thick, seal-like one. It is, in fact, a double coat, there being an outer coat of remarkably strong guard hairs and an inner coat of unusually water-resistant down hairs.

The Russian has a long, graceful body, a wedge shaped head with prominent whisker pads and large pointed ears set vertically. Eyes are vivid green. Coat texture is unique to the breed, double, short, thick and very fine, standing up soft and silky with a distinct sheen.

CATZ Inc accepts for Championship all of the above patterns and colours.