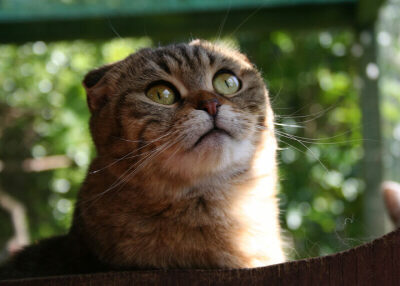 What is a Scottish Fold?

The first thing that comes to mind is the poem by Edward Lear entitled “The Owl & The Pussy Cat”. I’ve heard people say they look like pixies, owls and even little teddy bears, but what they’re actually describing is one of the most lovable, huggable cats with that “Who, Me?” look that has captured the hearts of many cat fanciers and judges around the world.

I guess that’s exactly what a shepherd named William Ross thought when he saw “Susie”, a white shorthair barnyard cat with “lop ears” on the neighbouring McCrae farm near Coupar Angus in the Tayside region of Scotland, northwest of Dundee. The year was 1961 and William, with wife Mary, asked the McCrae’s for one of Susie’s folded-ear kittens and in 1963, after two years in which the entire known worldwide population of folded-ear cats numbered one, the Ross’s were given a white shorthair female who was given the name of Denisla Snooks. Snooks was later bred to a red tabby domestic cat which produced a white folded-ear male whom the Ross’s named Snowball.

Denisla Snowball was later bred to a white British SH female named Lady May and the first folded-ear cat breeding program was established. The Snowball / Lady May breeding produced 5 folded-ear kittens and when Snooks was bred a second time, to a BSH male named Rylands Regal Gent, she produced two folds: a female named Denisla Hester of Mini and a male called Denisla Hector. These two cats and Lady May’s litter of 5 played an important early role in the establishment of the breed, comprising the foundation stock of the Scottish Fold.

By 1966 the Rosses had begun to register their cats with the Governing Council of the Cat Fancy in Britain as AOV’s (Any Other Variety) and at that stage the Ross?s were still referring to their cats as “Lop-ears”, after the lop-eared rabbits, but by the late 60’s the Ross’s had agreed to drop the “Lop-ear” name in favour of calling the cats Scottish Folds. In 1970, as the Scottish Fold was beginning to encounter resistance in it’s homeland, Denisla Joey, Judy and Hester were sent to Dr. Neil Todd in Massachusetts, USA for genetic research. Dr. Todd soon lost interest in his research and gave Denisla Hester to a doctoral student in genetics, who didn’t keep the cat long and instead sent Hester to Salle Wolf Peters who bred Hester to a black Exotic SH male named CH. Leprechaun’s Hurricane of Wyola. This breeding produced Wyola Jed Callant, a blue male, who was the first Scottish Fold to be registered with the CFA in the United States. The Scottish Fold was accepted for registration in 1974 and in January of 1978 was granted Championship status in the Cat Fanciers Association in the United States. 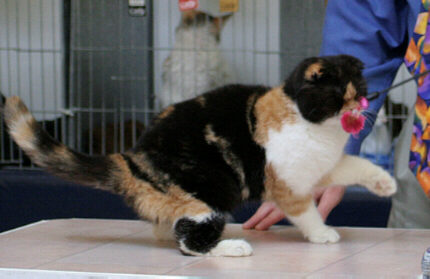 The Scottish Fold is a well balanced cat that shows no extreme in one direction or another and over the years has developed a look all its own. The Fold is a medium cat with a rounded, well padded body and a short to medium-short, dense and resilient coat that is soft and full of life. It has large, round, broadly spaced eyes full of sweetness; well rounded whisker pads and a short nose with a gentle curve in profile. The head is round and wide on a short neck with the males tending to be jowly. The ears should be set in a cap-like fashion to expose a rounded cranium.

Scottish Folds come in any and all colors possible with the exception (in CFA) of those showing evidence of hybridization resulting in the colors chocolate, lavender, the Himalayan pattern, or a combination of these and white.

Ah, the ears! Now we get to the principal distinguishing characteristic that gives this breed it’s unique look. The folded-ear is produced by an incomplete dominant gene and is the result of a spontaneous mutation. The ears are usually small, cap-like, and folded forward and down on the head. The degree of the fold and size of the ear may vary, but the tighter, smaller ear is preferred. Scottish Folds are born with straight ears and at about 3 to 4 weeks of age their ears begin to fold……or they don’t! Because breeding fold to fold is not recommended due to the fact that such a breeding can cause skeletal lesions, a Scottish Fold must be bred to a straight ear cat such as the American SH, the British SH or the straight ear Scottish Fold which does not carry the gene to make the ears fold down. Therefore the “average” Fold litter will have 50% folded-ear kittens and 50% straight-ear kittens. Although it is not uncommon for a Scottish Fold to produce litters that have either all folded or all straight-ear kittens.

Scottish Folds are hardy cats, much like their barnyard ancestors. Chirping sounds are often heard coming from the Folds, especially the young ones, although they have tiny voices and are not very vocal. Kittens and adults alike tend to enjoy sleeping on their backs, which comes from their relaxed attitudes. Two other distinctive traits of the Scottish Folds are their “Prairie Dog” stance which usually occurs after hearing a loud or unfamiliar noise and their sitting “Buddha” position. Scottish Folds adapt to almost any home situation and are comfortable with other pets, children and strangers.

As a “wash-and-wear” cat the Scottish Fold requires very little grooming beyond an occasional brushing or bathing and is an undemanding cat that only requires a clean environment, proper nutrition and generous doses of love.

The Scottish Fold has come a long way in the last 31 years……from a simple and humble barnyard beginning to one of the top ten most popular & pampered breeds of cat in many homes, as well as reaching National winning status at the cat shows.

The Scottish Fold is recognized for Championship with CATZ Inc. as is its longhair counterpart, the Highland Fold.